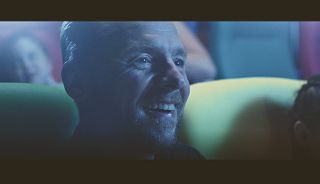 Visit Vue to see Simon Pegg in our new advert, All Forgotten!

In partnership (and thanks to!) Vue, we have recently launched a new advert to promote MediCinema which features our patron, acclaimed British actor, Simon Pegg

The short film by award-winning director Jonathan Harris (Firecracker, The Cull), focuses on the story of four-year-old Sienna, who was born with congenital diaphragmatic hernia, a potentially fatal birth defect, as well as complex heart defects.*

The CW+ MediCinema in Chelsea and Westminster Hospital, run in partnership with the hospital charity CW+ and where the advert was filmed, has provided a welcomed escape for Sienna during her long-term medical treatments. Having endured open heart surgery and battled life-threatening bouts of sepsis, Sienna was also admitted to hospital for 20 months for artificial nutrition given via a central line into the main vein of the heart for 16 hours a day.

The film is now being shown before all PG and higher rated films at 86 Vue sites throughout Great Britain. As well as playing a pivotal role in raising public awareness of MediCinema as we approach our 20th anniversary, the advert enourages all Vue customers to make a donation to the charity while buying tickets. This will raise much-needed funds for our work at this exciting time of growth.

Kevin Styles, Managing Director, Vue UK & Ireland, said “We are proud supporters of MediCinema and are delighted to launch a film that raises awareness of this inspiring cause, encouraging our customers to support and donate. We’d like to thank Sienna for sharing her story with us all”.

Simon Pegg, MediCinema Patron and British Actor said “I am honoured to be a patron of MediCinema, a truly wonderful charity that brings the magic of film to hospital patients across the UK. We had a wonderful time making this short film, and sincerely hope that it encourages people across the country to support MediCinema whenever they go to see a film.”

See the advert in Vue (or here) now, and why not enable more patients to enjoy big screen entertainment by making a donation when you buy your tickets at VUE online.

*Sienna is one of any thousands of patients with different conditions each year who come to MediCinema. If you have been affected by the information surrounding her condition and would like support, please contact CDH UK, the support organisation for families of children affected by diaphragmatic hernia. Call their free helpline on 0800 731 6991 or visit their website at www.cdhuk.org.uk. BLISS, the organisation for premature babies, may also be able to help. Their helpline number is 0870 7700 337 or you can visit their website at www.bliss.org.uk.