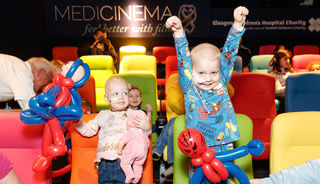 Thank you, Sony Pictures, for bringing us into the Spider-Verse!

On 6th December, we ran our second nationwide preview screenings campaign, this time in partnership with Sony Pictures. Spider-Man: Into the Spider-Verse showed at 263 cinemas throughout the UK, including Vue, Cineworld, Odeon, Showcase, Empire, Everyman and 14 independent cinemas, six days before general release, raising £32,000. That’s enough to give 2,666 cinema experiences to patients and their families.

In addition, 127 patients in Southern General Hospital, Glasgow, and Chelsea and Westminster Hospital, London got to see the film before anyone else with special preview screenings on the 1st and 3rd December.

Claire, mum to 10 year old Tayler said, "This has been brilliant. It's given us a sense of normality. Tayler has to go in for a seven hour operation tomorrow so this has been a really nice evening for us all as a family, especially Braden (above) who has taken his big brother's illness really hard. This has been more for him than Tayler and he's really enjoyed it so thank you.”

Albert, 11 (below) who has been in hospital for two weeks this time and was very down that day until he came to the cinema: "It was bloomin' awesome! The film was 14 out of 10!"

Thank you so much to Sony Pictures and all the cinemas involved.

We hope to run another nationwide preview screening to raise money for MediCinema in the coming months – sign up to our quarterly e-newsletter below to be the first to know more.